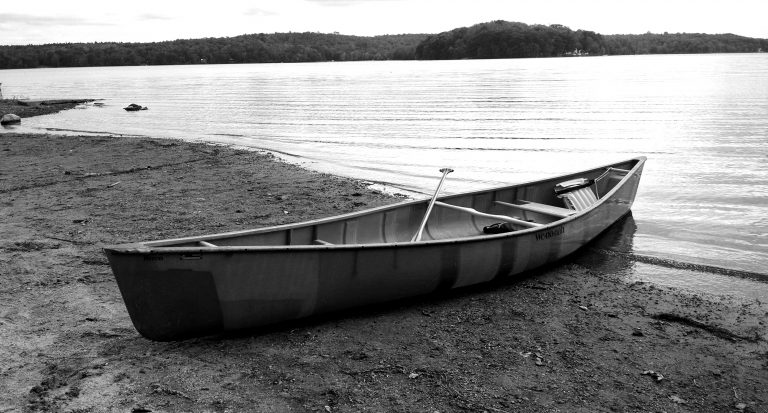 I knew as I plopped the Sara J., our 14-foot kevlar canoe, on the sand of Town Beach that I might be getting in a little deep. The wind was not harsh, but fickle, as it gets on Bantam Lake, first blowing this way, then that, then dropping to nothing as opposing gradients of air momentarily intersect.

Though the winds weren’t overbearing, the Sara J. is not the most perfect of lake canoes, particularly with a single paddler. She’s got a fair rocker to her bottom, no keel to speak of, and is astonishingly lightweight for her size (at least for a man whose earliest memories of canoes are of the wood & canvas or aluminum variety). She can turn on a dime on your command — but so can the wind make that command.

I secured my gear and pushed off. Always, I love the feel of the cool water lapping around my calves as I move the canoe to deeper water before jumping in. I was soon breaking free of the cove, heading southeast to reach Sandy Beach.

Or at least trying to. The wind alternated between northwesterly, southwesterly and southeast, and as the wind gripped the bow of the canoe and twisted her direction as it would, I found myself tacking back and forth, much as a sailboat would when heading upwind.

As I got closer to Sandy Beach, the fight got harder and the wind, if possible, got more squirrely. Eventually, I thought to myself that reaching Sandy Beach was just a made-up goal; something I had just decided to do to have a direction in which to travel, and the goal could be given up as easily as it was created.

So I let a sudden gust push the bow toward Point Folly, and I began paddling directly upwind. Though I was going directly against the wind, this was actually easier, as I wasn’t fighting both canoe and wind to keep on course.

I did have to maintain my course within a few degrees, and pay acute attention to shifts in wind direction. One paddle stroke too far in the wrong direction would upset my precarious perch, and send the boat swinging around.

As the wind played its fiddle tune, I kept time with it until I was in the middle of the lake and found myself, of all things, becalmed. I had been hard at it for a good 45 minutes at this point, so I slipped off the seat onto the bottom of the canoe, lay comfortably against the thwart, feeling the gentle rise and fall of the waves…

…and apparently fell asleep. As I came to, I looked about, and found I was a bit too close to the lee shore for comfort. I began paddling my way out, and that’s when the wind came roaring back, trying to force me against the rocks.

“Well, why fight it,” I thought, and let the wind blow the canoe and I until my back was windward. Then I just backpaddled into the wind until I was free from threatening shore. Normally prideful of my skill with paddle and canoe, I laughed to myself at how ridiculous I must look.

The clouds were beginning to pile high at this point, and the wind was less fickle and could even be called bracing, so I poked and prodded and tacked my way back to my launch site. I even overshot it a little bit on purpose, so the wind would be behind me as I changed course to make landfall. The last 5 minutes, I just sat in the Sara J. doing nothing but dipping the paddle in once or twice to make course corrections as the wind pushed me to my destination.

I pulled the canoe out of the water, and sat for a minute, looking at the whitecaps now being kicked up by the wind. I thought about how Taoists strive to live life in wu wei, or as bastardized in the West, “going with the flow.”

Wu wei isn’t really just passive floating in the currents of life, it is active, working with the ebb and flow of nature, time and man to accomplish one’s goals as part of that flow. It is being flexible, to be whatever one needs to be in that moment. It is sensitivity to the subtle changes in one’s environment (internal and external) and riding those energies as they arise.

Today’s outing, I realized, had been a perfect lesson in wu wei, encouraging me to creatively find ways to work with nature to find my goals, and even more, teaching me the wisdom of abandoning a goal. After all, few goals in life are really much more than my quickly-grabbed decision to reach Sandy Beach. And in abandoning that goal, I found peace and tranquility (and a nap!) in the middle of a squabbling lake.