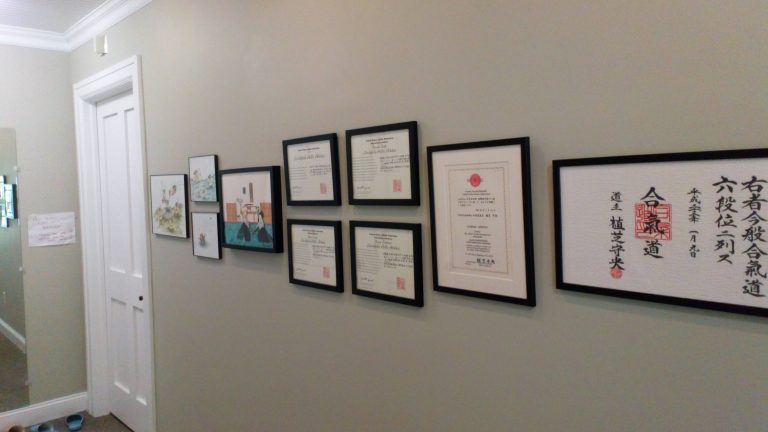 I taught class today. In the stillness of the morning before students arrived, I took a picture of Sensei’s brag wall. She started this dojo 25 years ago; I became her student somewhere around 1998–99. Though I took a long break in between then and now, it was not to train at another dojo. And when I first came back to begin training, after an absence of many years, I was overwhelmed by the feeling that I was coming home again.

A dojo is a made of a complex mixture of the Sensei, their students, and the location. A sensei will tend to attract a certain type of person who becomes a long-term student who, in turn, adds their own flavor to the dojo. The location adds its own spice to the mixture.

I remember when I first began training with Pavlick Sensei. It was in the second floor of an all-but-abandoned factory, with exposed brickwork and pipes, 12-by-12 wood beams, and broad, floor-to-ceiling windows that tilted open. The mats on the floor were covered with graying white cotton. In short, it was a gritty, no-nonsense dojo straight out of an Eric Von Lustbader novel.

Several years ago, she left that location. Now we’re in a brightly lit former office building, with drop ceilings, proper walls, and nary a wayward steel pipe or wandering electrical conduit to be seen. The mats are sea-green, and instead of slipping and sliding all over the place like in the last dojo, my feet grip and find purchase.

This location has a bit of a different flavor to it, but the essence of the dojo remains the same. Sensei’s dedication to the proper form of everything has not changed. She instructs the new students which hand should be placed on the mat first when bowing in seiza and spent a good 10 minutes the other night explaining to another student precisely how a bokken (wooden sword) should be positioned when sitting, rising and standing.

A westerner unfamiliar with budo might think attention to such minor items to be overkill, but it is not. In this art, we learn how to deal with physical conflict, armed and unarmed. We regularly do techniques which, if performed incorrectly, could injure, maim, or kill. If you don’t respect your training partners, respect your weapons, respect your teacher and in the end, respect your own growth in power, you will be injured. I’ve seen it happen and it has happened to me. This respect is more than just a Japanese cultural artifact, it is a means of protection both in and out of the dojo.

From my own chiropractic practice, I recognize the influence of personality on who becomes a patient. Though I treat a broad spectrum of people, from age to income to ethnicity to condition, I recognize that with all of my patients, there is a certain resonance. I notice the difference most particularly when I “inherit” a patient from another doctor. There is an adjustment period, and sometimes that patient never ends up quite fitting. It is more than procedural differences in how we bill or make appointments; there is an essential connection that I sometimes cannot make, despite these patients being excellent candidates for chiropractic care and a proven track record of its utility for them.

In the same way, Pavlick Sensei attracts students of a certain type, and this has resulted in a dojo that is largely harmonious. I cannot think of another student there that I do not enjoy training with, from the newest beginners to the oldest black belt curmudgeon. Altogether, I see little friction among students, even though we spend our time together three, four, or five times a week trying to hit, pin, or throw one another, activities which are sure to bring out acrimony, if it exists. Despite being at different levels in terms of our skills, we are all on the same page in some indefinable way. We work together, with each other, not against each other, even under physical duress.

That attitude of collaboration was on display this morning. One of the students is on kid duty with his baby, and even though he set her up with all of her happy toys off of the mat, she would still perk up and cry frequently, forcing him to jump off the mat to quiet her. After a few times of that, one of the other students got in the routine of popping off the mat to pick up the baby and comfort her so that dad could continue training.

“I just couldn’t see you driving here and not being able to train,” he said to Dad after class.

We’ve got a big, 25th anniversary seminar coming up in a few weeks, so Sensei has really laid down the law on post-class cleanup. The mat needs to be cleaned with a dry mop then with wet mops, so after bowing out, we all grabbed a couple of mops and did our thing.

One by one, everyone changed into their street clothes, chatted for a few minutes and left, until just I and one other senior student was left. We locked the door and walked out into the blazing sun. We said goodbye to one another, then I climbed in my car and he into his truck. I didn’t really want to go home. In a way, I already was.