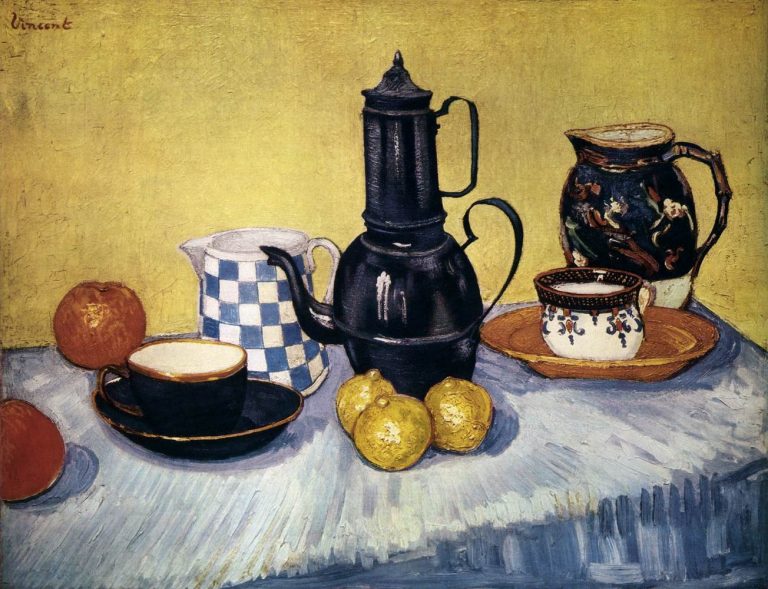 Fall is sneaking in the back door again. The window opened yesterday in the heat of the day is now letting in a decidedly cool breeze, falling over the sill and pooling on the floor, just enough to make my bare toes be the first to wake up, as I watch the coffee percolate.

I stand, patiently waiting for the pop of the percolator to stop, watching the water go from clear, to tea-colored, to the dark brown that tells me that it’s time to pour a cup. I give the grounds an extra minute to settle.

It was a good day yesterday; meeting new people, fellow aikido students, and helping my Sensei celebrate her dojo’s 25th year in existence. That’s a milestone worthy of recognition; few dojos can speak knowingly of a quarter-century. She had a huge seminar, with one of the biggest names in Aikido coming to guest teach. As I trained, I looked across the crowded mat, and saw people smiling at one another as they practiced the nuance of attack and defense. It was a joyful seminar, and it was good to see so many people come to help Sensei celebrate her achievement.

Coffee’s done now. I reach in the back of the cupboard, way in the back, where I keep what I call “the quintessential coffee mug.” I call it that largely because of all the coffee mugs in all the world, this one somehow fits my hand better than any other.

I bought at a small pottery shop it when my wife — then my girlfriend — and I were vacationing on Cape Cod in what we now call “our first time around.” For some reason, fate smiled on us, and after years apart, we got a second chance at things. The second time around has lasted 28 years now, and from the looks of things, is likely to continue.

But because this mug is so special, fitting me like a glove, and reminding me of a time of youth and endless possibilities, I only use this mug once a week. On Sundays, when I have time to enjoy its meaning and its contents. I don’t want to dilute it’s magic.

Mug in hand, I step out on the back porch. It’s an odd little thing, narrow and running the full width of the house, unlike the large square decks jutting off the backs of most. It’s more like the wood version of a fire escape you would find on the back of a New York tenement building. Sometimes, standing on it, I half expect a 1950s era New York tough to jump over the railing and start singing about his Puerto Rican girlfriend. Hasn’t happened yet, though that doesn’t mean it won’t.

I was thinking about going canoeing this morning. I love the local lake post-Labor Day. Summer crowds gone, nobody zipping about in overpowered motorboats to make waves troublesome for a small craft like mine, fall lakes are my time to shine. They are beautiful in their stillness, and when the trees put on their party dresses, the beauty takes my breath away.

But the clouds are heavy, the wind, though subtle now, hints that it will be picking up a bit later, and my toes remind me that the water has probably already begun losing its summer warmth.

Sipping from the Quintessential Coffee Mug, I step back inside. I catch a glimpse of my face reflected in the window. At that angle, with my beard trimmed in this way, I think I look a bit like Ernest Hemingway. Well, I guess if I can’t write like him, at least I can look a bit like him.