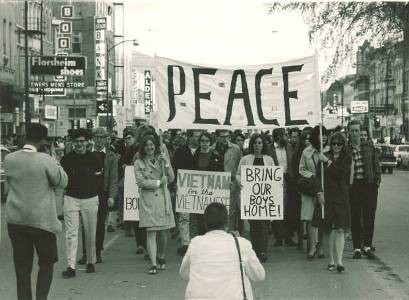 Sometimes I look at my generation and wonder what the hell went wrong. The young ‘uns castigate us, and rightly so, for hoisting a gibbering, slobbering, lust-crazed baboon into the white house, and for stuffing our never-sated stomachs with all of the worlds riches we can grab. And they’re right. We deserve that approbation.

Yet, in our day, we fought and were jailed and died for opposing unjust war, fought and were jailed and died to give birth to civil rights, and created lifestyles dedicated to equality and sustainable living. From us came the ecological movement that stopped DDT and brought back organic foods, women said “no more,” and the gay and lesbian community began their long march to acceptance.

How can I reconcile those two visions of the men and women of my generation? How can I possibly see in the angry old man behind the steering wheel of a car carrying a “God Loves Trump” bumper sticker, a younger man marching against a similarly criminal president 40 years ago?

I can’t. I just can’t. I can’t wrap my head around the notion that we have become what we once most despised, or as Pogo said, “We have met the enemy, and he is us.”

We walk in a land saturated by the blood of children shot dead by their classmates, a land where people of color are unjustly jailed for the new slave labor system, where families of specific origins and religions are ripped apart on the unjust whims of white supremacists. And it makes me sick that, not only are my peers participatory in this social pathology, but that we are in many cases the architects of it.

It makes me so angry that I want to stand in the middle of the street at noon and scream “WHAT THE HELL IS WRONG WITH YOU?” until somebody, anybody, responds. You want to yell back? Go ahead. You want to fight? Please, let’s. It won’t be my first time at the rodeo.

But that’s not the answer, either. More anger, more hate, fed into the fire will swell it, not diminish it.

In the end, people hate others because they hate themselves. People cause others pain because they are in pain. The only cure for hate is to let go of it yourself, and then it will have a less tangible hold on the others around you. The only way to prevent others from causing pain is to take care of your own pain. Then, perhaps, you can lead others to that place as well.

I can only hope that others in my generation find a way to let go of their pain, and find their way back to the fresh ideas that stirred so many of us to action those many years ago.

All I can do to help, I’m afraid, is lead by example. It’s the best I’ve got.