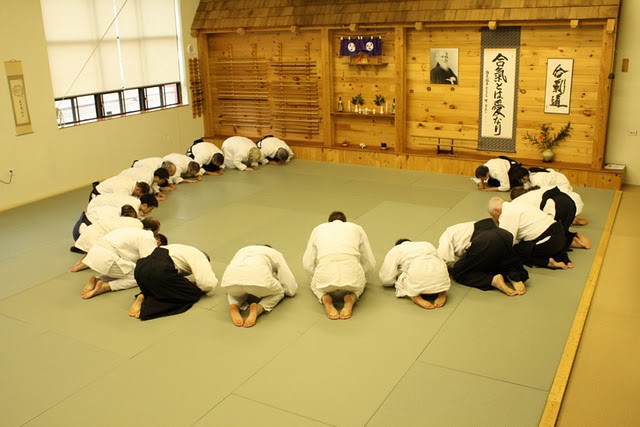 After class today, Sensei noted in passing that, unlike aikido, most forms of exercise and self-development are solitary pursuits. That got me thinking. Even if riding or running in a group, you are still riding your own ride; others are there for the companionship. Similarly, meditation, yoga, journaling and other means of internal growth are singular pursuits, even when performed in groups.

Aikido is an exception to this. Training in aikido leads to an interesting understanding of the hands, feet, head and heart of other people. The complex dynamic of attack and response invites a certain intimacy with others that drives to the core of who they are. In one partner, I see the combination of fear and determination in his eyes as my hand strikes at his head; in another, I feel the tension borne of resistance to submission as I fold their body into a throw or a pin.

And they see me. I don’t know what they see, but I can guess at a couple of things. There’s a certain wildness in my attack, a wildness I had to work hard to control to actually make it a good attack; there’s probably some fear in my body, too, as I know I am always only one bad injury away from having to hang up my hakama forever. I’ve been there once. I’ll be damned if I go back there again. Literally.

I also know that sometimes when we’re all lined up, the whole class taking turns being thrown by one person, that a certain look sometimes gets passed among my dojo mates when I’m the guy in the center. My preference is to interpret it as “whoa, Avery’s on a roll again,” but it is perhaps more likely that the look means, “oh, Avery’s being an asshole again.”

This live training is what makes aikido such a fantastically powerful tool for self-development. Because time after time after time, the essential you is coming up front and center with the essence of someone else. Action and response, while guided by the technique, is really determined by the internal makeup of the two individuals. Unlike ten reps of bench presses which all go pretty much the same except for the fading strength of your muscles, ten aikido throws using the same technique are never identical. Fast/slow, hard/soft, left/right, everything is different every time, even with the same partner. Yet at the same time, you feel the underlying personality creating the attack or the throw.

This is what I love about aikido, and what I hate about it. I can execute one throw with grace and power, sending my partner to the mat with a carefully calculated vector of force; 30 seconds later I will misjudge the thrust of their attack, or my position, leading to a less aesthetic — and less effective — technique. Nonetheless, over time, my adaptation to variation has become increasingly skilled. Their response to my technique provides immediate feedback as well; did I use too much force, creating excessive pain? It happens, and people will respond with a variety of emotions, from anger to sadness to fear to shame. Each time we make contact, I learn about this person, in a very fundamental way. If you are empty of yourself, the crucible of conflict fills you with knowledge of your opponent.

That first phrase is the key one. Unless you are empty of yourself, at that point of meeting, that instant of contact, all you will see is yourself and the state of your own soul. To truly see the attack, to see the other who is attacking you, you have to meet the attack with an utterly empty mind, with an awareness that is not ego-based.

This is identical to the awareness developed through solo meditation. This is what the one who sits strives for, that moment of non-self, of a nonduality encompassing the world around them. And in that moment, for one who is aware, there is an overarching compassion, for each part of it is you, and you, it. Loving all, you love yourself.

Yet in aikido, this moment of non-self happens in a very dynamic, possibly highly emotional environment. After all, somebody is trying to whack you upside the head. Which gives it a flavor not found in solo pursuit of enlightenment. In meditation, you find engagement with a greater whole by disengagement; in aikido, engagement itself is the key to that same insight. Not surprisingly, you also come to see your attacker with compassion.

Hmmm. Compassion as the conclusion to an unarmed conflict? It hardly seems likely, but there it is. And that is precisely the paradox that Morehei Ueshiba created for his students when he synthesized a martial art called aikido — which translates to The Way of Peace.