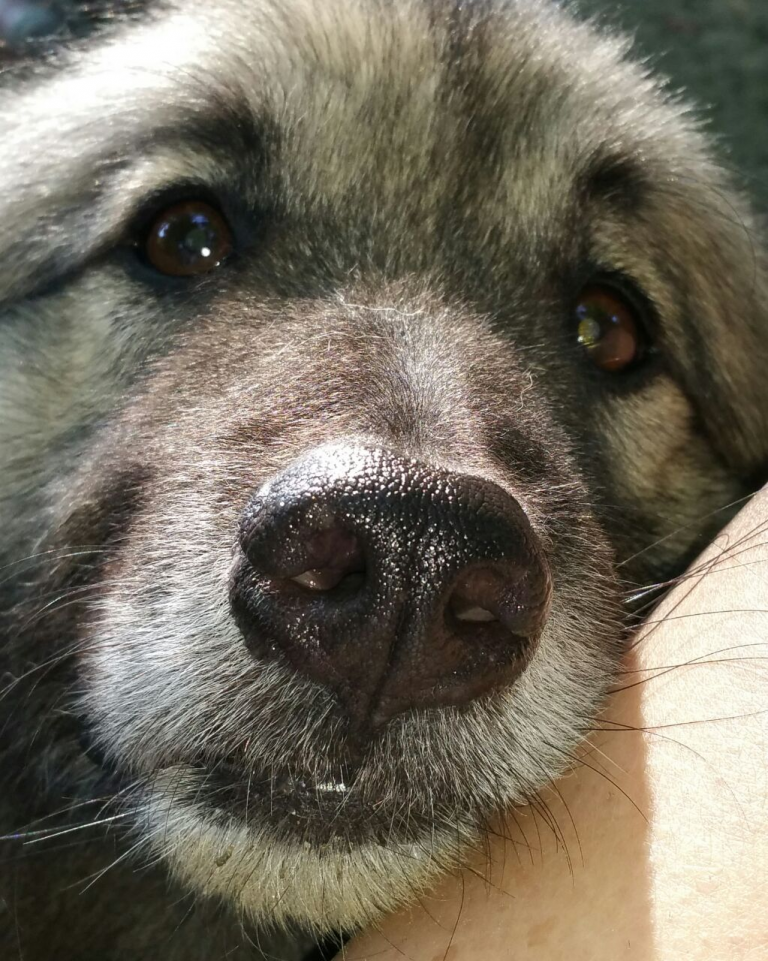 There is nothing as lonely, desolate and beautiful as a New England lake in the middle of the day, in the middle of the week, at the beginning of fall. The Labor Day motorboat crowd has left, with its mindless rushing from one end to the other, and the skiers are finding the water a bit too cold to their taste. Fishing is past it’s prime. So the lake is absent of gas-fueled artifice and foolishness, and free to express the winds and the current as it will.

I unloaded the canoe off the top of the car, and looked out over the waters. Toward the middle, where the wind could blow unbridled from the southwest, there was some chop and a whitecap here and there. I shrugged my left shoulder; I’ve been fighting some tendonitis there for a week or two, remnant of an over-adventurous aikido class. I figured it would probably hold. I slid my paddle under the center thwart, dropped the life vest in, and went back to get my paddling companion.

His name is Archie; Archie the SuperPup I call him, but the fact of the matter is that he’s a bit of a whacknut. An unscheduled electric shock in his youth left him a bit addled, and apt to behave unpredictably. Despite that, he shares the innate intelligence of his breed, and something even better — a love of boats.

Archie is a keeshond. They are boat-bred from stem to stern, the favorite companion on Dutch barges back in the day, and a symbol of the Dutch Revolution. I’ve been reluctant to bring Archie on a boat with me until now, fearing chaos on the dock and impromptu dives into the water, upending all in his wake. But in the past week or so, he’s proved his worth in a canoe, so I decided to give him a shot at a solo run.

We load up, push off, and head out. As soon as we exited the small cove harboring Town Beach, the wind takes a long swing at us, seemingly determined to turn us back. My initial plan had been to drive us straight across to Sandy Beach in North Bay, but the tenacity of the wind has me making other plans in short order.

I’m paddling the “Sara J,” a lightweight 14-footer which we named after my mother. She’s got a some amount of rocker and not much of a keel, which makes her nimble in a river current, but a fair handful keeping her on course in a wind. She likes to weave to and fro when beating upwind, and if you don’t keep an eye on her, she will take so much leeway that you’re next door to the shore before you know it.

Rather than fight with the crosswinds, I turn her directly windward and head toward Point Folly. It’s slow going, and midway there, the wind picks up and her bow starts slamming into the whitecaps with a resounding bang each time. The water splashes onto Archie, who has been largely minding his own business and keeping a sharp eye on the birds overhead. He shakes his head and resumes his surveillance of a nearby gull.

Though stiff, the wind and waves aren’t particularly concerning. I learned to paddle long before I could drive, and was riding Class III rapids in an open canoe by the time I could parallel park. Another gift from my father, this love of boats and boating. I hear his voice in my head as I dip the paddle in the water, some long damn story that I had already heard 30 times. I miss him.

Soon enough, Archie is poking his nose to starboard, and I can see people walking along the dirt road the runs along Point Folly. We round the point, with me expecting a blast of wind from an entirely different quarter, because that’s how this lake rolls. But instead, it quiets down, and we paddle easily toward Keeler Cove. Here, I can see the tired green of the early fall leaves, so different from the excited, vibrant color they started with this spring. A few of the smaller trees on the shore have actually begun turning color, with dabs of bright red here and there. So anxious they are to meet the winter!

I can understand. I’m reaching the autumn of my own life, and my crown’s color has changed as well. I’m glad that I’ve come to welcome this part of life; it would be such a difficult struggle if I had not been able to come to terms with my own mortality and slow erosion of my physicality.

With that, I suddenly remember that I forgot to take my hearing aids out, and if there’s one thing they don’t like, it’s water. Should Archie and I dunk, I’m out a fair piece of change. I scramble to grab the waterproof pouch in the stern, and put my hearing aids inside, nearly dropping one in the drink in the process.

Again rounding the point, this time I turn upwind, and let my paddle rest on my knees for the first time in an hour. Archie lies on the bottom of the hull, casting his eyes at me for treats. I smile at him. Our old keeshond, Nick, was my constant companion on every kind of boat, from the slab-sided 19-foot Potter I used to moor on this lake, to the inflatable dinghy I used to shuttle the girls back and forth when they were still little. In the log of my sailboat “Mirapei,” Nick is listed as my first mate on every voyage.

When he got too ill to join me on our adventures, I stopped sailing, and when he passed away, I thought for a long time I would never want to captain another vessel again. Yet here I am, wistfully in love with a whacknut of a goodboy who loves his wind and waves every bit as much as Nick. I’m glad to have Archie with me. I reach forward and tousle his mane.

I let the wind blow us northward, dipping the paddle in only enough to keep us on course. The sun’s getting lower, and clouds scud across the sky. For us, it’s time to get home, but as I approach the landing at Town Beach, I see figures scuttling back and forth in the distance. It’s the rowing club getting ready to launch their shells. Archie sits up and takes notice. As we come into the cove, they begin launching, in shells of two and four and eight, like bees exiting from a hive. Archie begins to whine. He wants to go back out with them, I’m pretty sure.

Instead, we slide onto the beach. I stow Archie and our gear in the car, then come back to get the canoe. Looking across the water, I think of Nick, and my father, and my days sailing with my girls. It’s all written here, all of it, the love and the loss and the joy, written in the wind and the glittering waves.

I bend over and with a quick heave, pick up the Sara J in her entirety, throwing her above my head like I was picking up a balloon. I carry her across the landing to the car without looking back. I may be old, but I’m not that old. Behind me, the waves gently lap onto the beach.