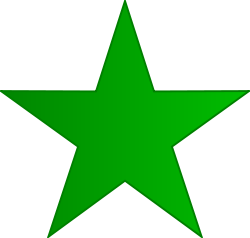 Over the years, I’ve borne willingly the laughter of many people over my interest in Esperanto. Usually it is some variation of “Who speaks *that*?” spoken a little condescendingly, referring to either the type of person who speaks it or the number of people who speak it.

I don’t know how many people speak Esperanto. Nobody does. A good guess? Two million. Will it ever be a dominant language on this planet? Doubtful. But that’s not necessary.

You see, Esperanto was conceived as a means for the common men and women of this world to speak to one another. You don’t have to be proficient in languages to learn Esperanto. It is simple to learn, yet it is robust enough to express the full range of human ideas, and more than that, widespread enough to have its own corpus of literature, works originally written in Esperanto. I have read a romance novel written by a Chinese woman, a crime novel written by a Hungarian man, medical research published in an Esperanto journal; you can get everything from a sex education book to poetry to music, all written in Esperanto.

It is phenomenally easy to learn. In six weeks, you can go from ignorance to enough proficiency to read all those books I mentioned, and certainly to chat in the language.

But its ease of use and its broad literature isn’t the point. The real point is why Esperanto exists. It exists to be a common second language for all people, free of cultural baggage.

We don’t often think of it, but our native tongues, whatever they may be, are larded with assumptions about our world, from whether objects have genders based on description and use, to how many different colors there are, to whether or not there is a yesterday — or a tomorrow. Something as fundamental as our perception of time is altered by our language.

Esperanto was created to be free of that cultural baggage, thus giving all peoples the opportunity to meet on a level plain, rather than having to adopt the assumptions and idioms of another before being able to sit down over a cup of coffee with them.

Esperanto exists as a counterpoint to nationalism, as a keyhole for those locked in an us vs. them worldview to peer through and perhaps discover that them isn’t so different from us.

Esperanto exists as a means by which tribalism can transcend violence. Key to the vicious racism that we’ve seen surging over the past several years is the ability to make the “other,” whether brown-skinned or wearing a hijab, into something less than a human. Racists re-envision such people as violent killers, rapists, bent on destroying our country (those are our President’s own words, by the way).

They aren’t, of course. They’re people who make dinner, do their laundry, worry about their children, try to make life easier for their aging parents.

Fascists and nationalists can’t see that, particularly through the distortions of their own language. What would happen, I wonder, if you stripped that away from them? Something they fear, I would guess; otherwise the demand that all Americans must speak English, a universal conceit of every alt-right group, would not be such an issue.

One of the themes of my first novel, which is gradually nearing completion, is the power of language to change us, and the world around us. Language is the lens through which we learn to perceive our reality, and by changing that lens, we change our reality. Language is the most powerful tool of humankind.

And, yes, part of that novel revolves around Esperanto. Befire you roll your eyes, ask yourself this question: Do you understand what it means to converse with another in a language that neither of you own but both of you share? Do you, in fact, have the courage to meet your brother from another mother, sister from another father, without the armory of your mother tongue?

If you don’t, well, that’s fine. Go ahead and roll your eyes. But if you do have that courage, well — I know a couple of people that would like to speak with you.