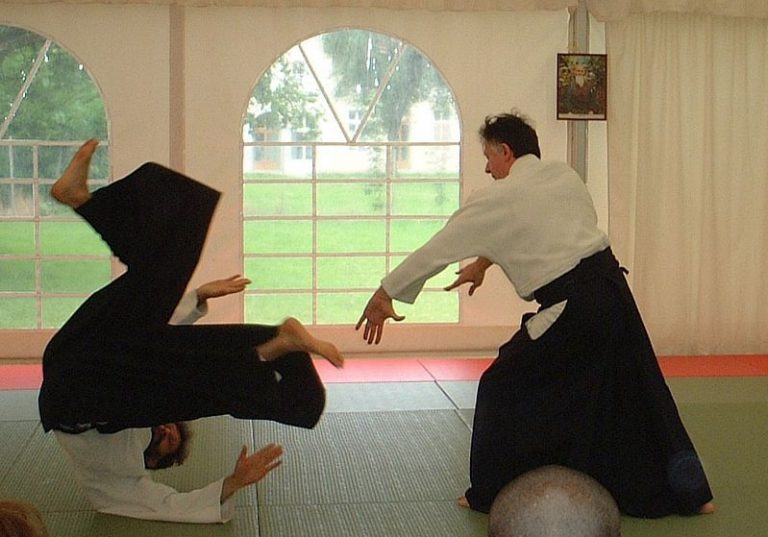 Yesterday I taught aikido class, and I found myself using language not frequently heard in a martial arts studio. As I was teaching the techniques, I was saying things like “welcome your attacker with open arms,” and “your attacker is your friend, here. Keep him close.”

Aikido translates to “The Way of Harmony,” or “The Way of Peace,” but that, in turn, does not translate into “turn the other cheek,” as we in Western cultures tend to think of as peacefulness. The peacemaker in aikido is not passive, but very active in converting an aggressive attack into an attacker thrown off to the side or pinned to the ground. A fist to the face becomes the lever arm by which the attack is redirected and the attacker thrown. A grab from behind provides the momentum through which the grabber becomes the grabbee.

People, even those within the aikido community, dismiss such concepts as being too woo, too new-age-airy-fairy, to make for an effective martial art. I disagree. It is precisely the principle of creating harmony out of conflict, of addressing an enemy as a friend, that makes aikido so powerful.

Visualizing an activity in sports, whether it is shooting a basket, making a goal, or running a marathon, is part of creating a successful outcome. Every top athlete spends time visualizing success, and multiple studies have shown that the power of visualization is almost as strong as practice itself.

Thus, when I imagine myself welcoming my attacker, I am creating in my mind the body position, direction, and fluidity of movement that a particular technique may require. My muscles are relaxed, my attention not enfolded into tunnel vision, and thus my response to the attack can be flexible and committed, without giving away of my own balance and strength.

And even as I disable the attacker, I protect him from greater harm than necessary. The purpose of aikido is not to maim or to kill, the purpose is to render the attack worthless.

And in protecting my attacker, I protect myself. Beating people up, physically, verbally, or emotionally, doesn’t feel good. It doesn’t leave me feeling like a champion. It leaves me feeling sad, and ashamed, at what I have done. When I deflect an attack, leaving my attacker relatively unharmed but unable to attack again, my emotional, as well as physical outcome, is better.

Outside of the dojo as well. How many times in recent years, has a smile given confidently, rather than a middle finger, taken the air out of an emerging fight? How often have I changed a conflict from destructive to instructive simply by shifting my own frame of reference, stepping to the side of the attack, as we do in aikido, giving space to my own point of view?

When you think about your attacker as your partner, when you greet them with open arms rather than closed fists, you maybe are less capable of achieving a victory in the common sense, but you become capable of changing the nature of the conflict itself. And that is an outcome far more powerful than the faux-sacred “win.”