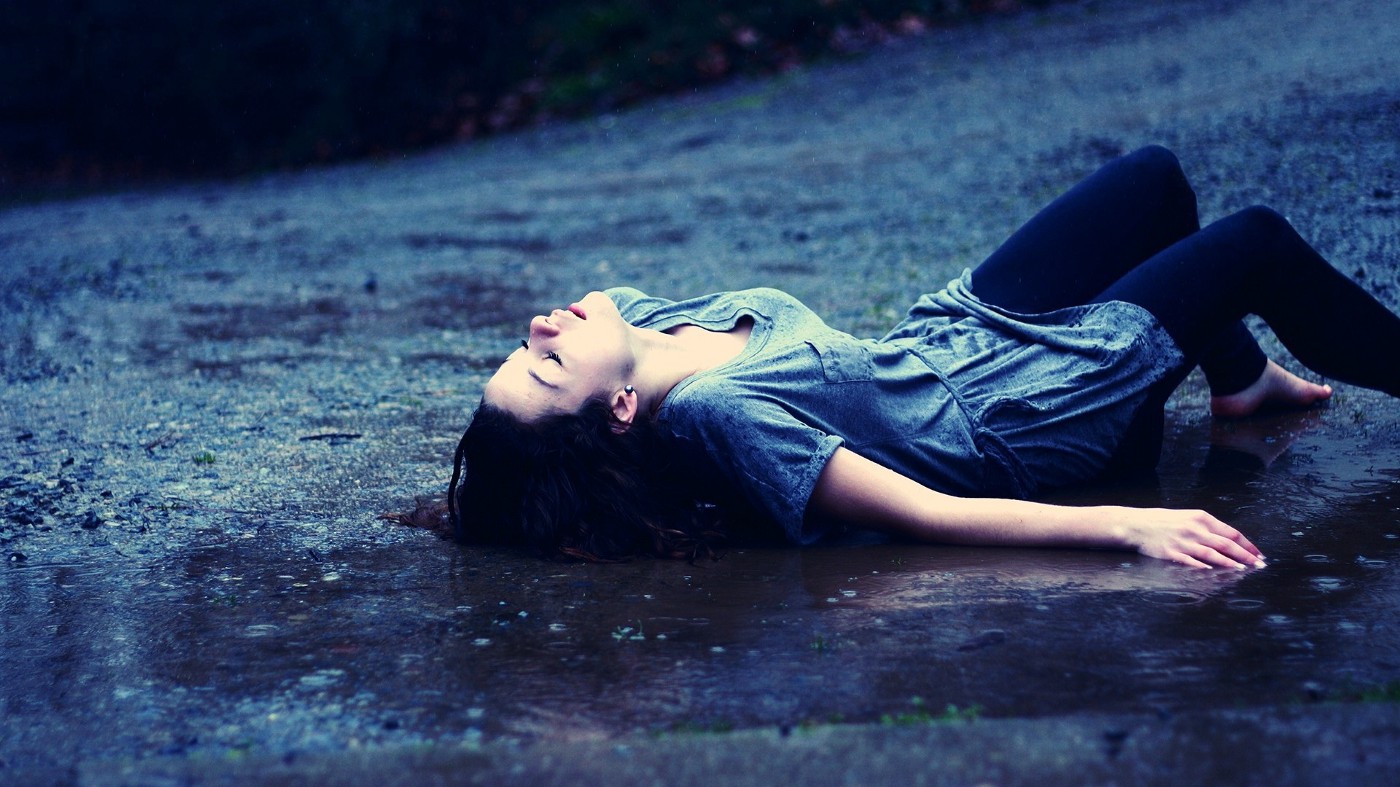 Tanya Ito dropped her go bag next to the woman. She was lying on the ground on her side, a broken branch protruding from her right abdomen. Tanya’s flashlight flicked over the area. There was blood, though not much, on her shirt, none on the ground. Most of the bleeding was going to be internal, Tanya thought.

Tanya had noticed the crash only by sheer luck. She was on her way back from harvesting some yarrow from a hillside up north, and was late coming home. A flash reflection of her headlights — a glimmer of chrome or window, or something — caught her eye as she came around the curve, and then she saw the overturned vehicle, down the embankment and in the woods. It was midsummer, and the broken vehicle was half-hidden by the foliage.

Of course she stopped. She worked part-time as an EMT. It filled in the money gap as a traditional healer. Tanya, daughter of a Japanese woman and a white American father, had spent her life with one foot in the door and one foot out, professionally and personally. It had been painful for her during her teen years, especially after her mother left, but she learned to get by. She got by mostly by keeping people at a distance, saving her intimacy for those who were ill or injured. So of course she stopped, and pulled out her first aid bag, and walked down the embankment, scanning with her flashlight as she approached the car.

It was empty. No air bag deployed. Engine still hot. Tanya thought that maybe the driver had gone off for help, but that’s usually not how these things went. So she kept looking until she found the woman where she’d been thrown from the car.

Tanya kneeled down beside her. So young, she thought, followed by since when did I get old? Tanya was only 35. This woman was in her early twenties, at the most. There was a pulse — shallow, rapid — and dilated pupils that responded to her flashlight.

No response. Deep in shock.

Tanya looked around her. Normally in these situations, she was surrounded by the accoutrements of modern emergency care. Someone would be setting flares up above, and bringing down a litter for transport. There would be flashing lights, and the crackle of the ambulance radio.

Which would have been of little use here, as was her cellphone. The signals didn’t reach this far into the river valley.

Tanya knew what she should do next. There was no way she could get the victim up the steep embankment. She should stabilize her as best she could, drive until she got phone service, call 911. Tanya looked at the woman’s face, so very pale in the glare of the flashlight. Thirty minutes, at the best, until someone else could get here.

She won’t last that long, Tanya thought. That wasn’t based on her EMT training, her analysis of body, pulse, breathing, fluids. That came from the other side of her. But what if she can?

She can’t. She won’t. Then another thought. Stay with me!

But it wasn’t Tanya saying that. She leaned closer. “Who are you?” Tanya said again. No response.

Then a thought, again unbidden. Tell Terry! Urgent, pressing. Tanya said nothing. She sat back on her heels, seiza-style, and let her mind empty with deep, slow breaths. Her mind stilled, she could now see the branch sticking out of the woman’s abdomen moving slightly, quivering, a quck jerk, then a slow, very slight, tipping up.

The victim was a thin woman. The branch wouldn’t have far to go to perforate her colon, set up the internal bleeding that would be almost impossible control, and if you did, the inevitable infection. Brown, curly locks, unlike Tanya’s straight black hair, going halfway down her back. She would have been a cheerleader at my high school, Tanya thought.

It had been tough, especially then. No mother to guide her through the uncertainty, spite, and jealousy, made worse by her ancestry. Half the boys had bamboo fever, and the half that didn’t and most of the girls just settled for “Asian slut.” She had hated them, hated them, and feared them, and been ashamed of her Asian-ness. She cut her hair short, and wore glasses even though she didn’t need to, and kept everyone at arm’s length. And she’d gone out into the woods, to finish the teaching her mother had given her in traditional medicine before she disappeared to go back to Japan. Tanya learned the herbs, when to harvest them, how to prepare them. All of them, even the poisons and hallucinogens that she had never used, though she’d thought about it a few times.

This girl looked like one of the ones who would have made racist comments behind her back, or teased her to her face.

Tanya realized her mind had drifted, and brought it back to the present. She rested her hand gently on the victim’s arm. It was still warm. Faintly, she could feel the woman’s ki. It was slowing.

“Hey,” Tanya said gently, but loud enough for a dying woman to hear. “What can I do for you?” Then she sat back and breathed and waited.

Nothing for a minute, then the faintest of whispers. A tug of emotion on her sleeve. Several emotions. Anger. Hatred. Love. All jumbled together, leaking out of the woman slowly, like blood oozing onto the ground.

Tanya knew those weren’t her emotions. She had spent years silently sitting zazen, at first attempting to bring her mother back by doing all the right things, by pleasing her mother in her absence, as if her mother would ever know. Then Tanya continued doing it because of the peace it brought her. Then slowly shedding the shell of self, putting it on and off like a dress she bought at a consignment store, and only really half-liked, but the price was right. She knew all about the illusions of that dress. That’s how she knew that those emotions came from elsewhere.

What she didn’t know was what she was feeling right now. She felt hate all right, she knew that emotion. The love, not so much. She’d had boyfriends, never for more than a few years. The guy she was dating now? Volunteer firefighter, nearby town, they’d met on a call. He didn’t seem to notice her ethnicity, though as she aged, she’d found she could style her clothing and makeup to “pass” if she needed to. What a horrible concept. She was who she was.

As was this girl. Tanya once again set everything aside, taking off the filters that made the everyday world, and waited. This time it was more than a voice. It was a presence, and then, coming out of the blackness, a form.

“You’re dying,” Tanya said simply. She waited a beat. “It’s confusing for most of us, at least at first. But we’ve all done it before.”

The figure nodded. She was beautiful, Tanya thought, especially with the blemishes of life fading from her.

“Is Terry here?” the woman asked.

“No,” Tanya said. “Just us. You went off the road, and flew out of the car, and now you’re bleeding to death.”

Suddenly the vision fell to her knees, wrapping her arms around her stomach in pain. Tanya almost reached out to comfort her, and then stopped herself from the futile motion. “There’ll be no pain soon,” she said. “Just wait. Be patient.”

“I’m not who you think I am,” Tanya said, realizing the lie after she spoke it. Tanya hadn’t been here before.

“I can’t stop this,” Tanya said. “The only thing I can do is pass your words now to others.”

“Tell Terry — omigod, tell Terry — Oh god, it hurts so — ” The woman calmed herself. “I loved him.” She looked at Tanya. “You know, really loved him. With everything. You know what I mean?”

The roil of emotion inside Tanya nearly broke their connection. Asa, goddamn you! she thought. A memory, when they first met, the old man walking on the riverbank like he owned the world, and presuming to know her. Assuming they could have been lovers. You son of a bitch.

Then something else, another memory, Asa talking to her. “You, me, we’re just part of the current,” he said, “Find yourself some rapids, some place where people are living hard and dying fast, that’s how you stay alive. Just get in an eddy. Make yourself part of that current. Won’t last long, but maybe get you to the next one.”

Old fool, Tanya thought. But she’d fallen in love with him just the same. Daddy issues, she’d told herself. And she’d never let on, but she couldn’t let go, either. He’d never pressed things. She wondered if he even knew himself.

She brought herself back from that thought. “This isn’t the end, you know.” The dying woman’s form looked at her. “Just a stop on the way. There’ll be more — ”

“That’s not what I want. I want Terry, I want my mother!”

In the end, didn’t it all come back to that. We all want our mother back, Tanya as much as — or more so — than anyone.

As Tanya said that, she noticed the woman’s image was getting thinner, weaker.

And then the movie started.

Tanya watched, as a little girl jumped out of a car, falling and getting a bloody nose. Her mother, picking her up, holding her. Then a slightly older girl, 8 maybe, in her bedroom, and somebody was in there with her. “No, no,” the girl pleaded silently to her cousin. And the same to an older boy in middle school.

Then a cheerleader, and jumping and tumbling in front of the crowds and feeling empty inside, when her boyfriends hand touched her, and razor blades in her hand as she sliced the inside of her thighs, trying to just feel something.

Parties, bottles all lined up on a table, noise, confusion, falling down, laughing, being carried off by some boy she didn’t know, skin dark like old workboots, taking her home. Terry got her mother out of bed and left.

A job, folding and hanging clothes, being nice to people even when she felt like dying, and slowly a growth back, Terry again, and things were moving faster, a wedding went by in an instant, and a trip to the Cape, and moving, and then a car tumbling over and over and over and over.

There was no response. Tanya’s eyes cleared to that other place, the vision not in her mind, now barely visible against the blackness, crumpled on the ground. It was time.

She reached forward, into the woman’s body, feeling the tendrils of the life force still holding on. How hard we try, Tanya thought. And why?

She pulled at the remaining strings of life, tugging tenderly, as if she were easing the roots of an herb out of the earth, each little strand coming loose without breaking, and then drifting into the night. The woman twitched once or twice, and then her body spasmed as the last one came loose.

Tanya sat on her heels for a while, just breathing the night air. She looked at the dead body in front of her, and slowly stood up.

She turned her flashlight on again, and looked around the car until she found the woman’s purse and in it, a cellphone.

She scrolled through it until she found the number for Terry. When she got to a place where there was service, she had a message to deliver.

3 thoughts on “A Scythe of Her Own”